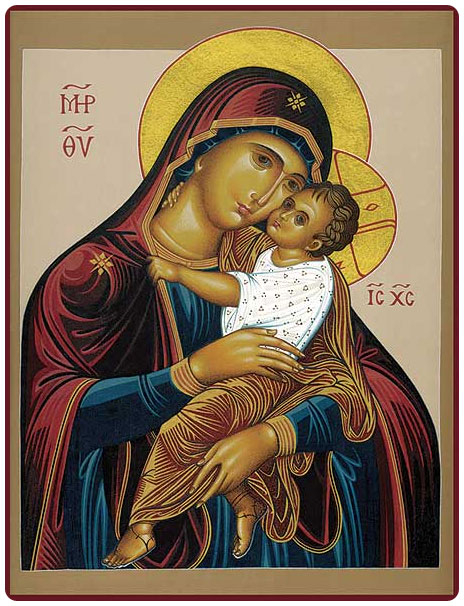 The shepherds went with haste to Bethlehem and found Mary and Joseph, and the child lying in the manger. When they saw this, they made known what had been told them about this child, and all who heard it were amazed at what the shepherds told them. But Mary treasured all these words and pondered them in her heart. The shepherds returned, glorifying and praising God for all they had heard and seen, as it had been told them. After eight days had passed, it was time to circumcise the child and he was called Jesus, the name given by the angel before he was conceived in the womb.

…The Evangelist speaks of Mary's motherhood starting with the Son, with that "babe wrapped in swaddling clothes", because it is he - the Word of God (Jn 1:14) - who is the reference point, the center of the event that is being brought about, and it is he who ensures that Mary's motherhood is described as "divine"…The title of "Mother of God" which the Liturgy highlights today, stresses the unique mission of the Blessed Virgin in the history of salvation: a mission that is at the root of the worship and devotion which the Christian people reserve for her. Indeed, Mary did not receive God's gift for herself alone, but in order to bring him into the world: in her fruitful virginity, God gave men and women the gifts of eternal salvation…

It is in the name of Mary, Mother of God and of men, that since 1 January 1968 the World Day of Peace has been celebrated throughout the world. Peace is a gift of God, as we heard in the First Reading: May "the Lord… give you peace" (Nm 6:26)…

May the Virgin Mary give us her Son, may she show us the Face of her Son, the Prince of Peace. May she help us to remain in the light of this face that shines upon us (cf. Nm 6:25), in order to rediscover all the tenderness of God the Father; may it be she who supports us in invoking the Holy Spirit, so that he will renew the face of the earth and transform hearts, dissolving their hardness in the face of the disarming goodness of the Child who was born for us. May the Mother of God accompany us in this New Year; may she obtain for us and for the whole world the desired gift of peace. Amen.