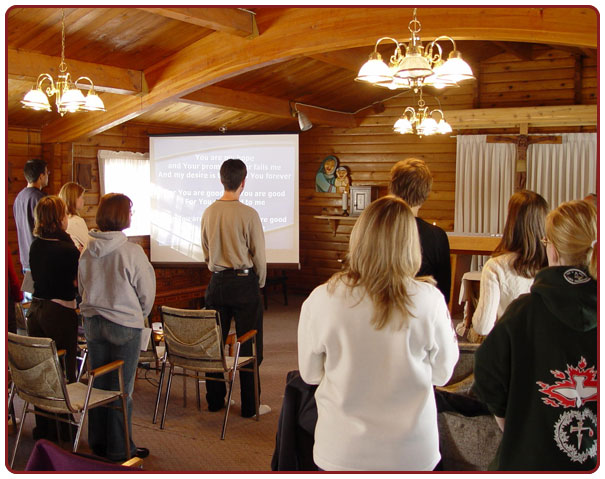 Peter came and said to Jesus, "Lord, how often should I forgive my brother or sister if they sin against me? As many as seven times?" Jesus said to him, "Not seven times, but, I tell you, seventy-seven times."

"For this reason the kingdom of heaven may be compared to a king who wished to settle accounts with his slaves. When he began the reckoning, one who owed him ten thousand talents was brought to him; and as he could not pay, his lord ordered him to be sold, together with his wife and children and all his possessions, and payment to be made. So the slave fell on his knees before him, saying, 'Have patience with me, and I will pay you everything.' The lord of that slave released him and forgave him the debt.

"But that same slave, as he went out, came upon one of his fellow slaves who owed him a hundred denarii; and seizing him by the throat, he said, 'Pay what you owe.' Then his fellow slave fell down and pleaded with him, 'Have patience with me, and I will pay you.' But he refused; then he went and threw him into prison until he would pay the debt.

When his fellow slaves saw what had happened, they were greatly distressed, and they went and reported to their lord all that had taken place. Then his lord summoned him and said to him "You wicked slave! I forgave you all that debt because you pleaded with me. Should you not have had mercy on your fellow slave, as I had mercy on you?" And in anger his lord handed him over to be tortured until he would pay his entire debt.

"So my heavenly Father will also do to every one of you, if you do not forgive your brother or sister from your heart."

Peter has to be commended for drawing from Jesus' immortal teachings. His question echoed our very question because forgiveness is not an easy human response to debts, to unfinished commitments and hurts. To his question to Jesus, Peter suggested a Rabbinic teaching of three times and added four more times to make it seven. Seven times must be enough, or so he thought. Jesus' response brought Peter's suggestion further than he imagined. In Jesus' heart, that is, in God's heart, there is no reckonable limit to forgiveness.

The story of the unforgiving servant brought this teaching to light. Jesus never tired of teaching his disciples to love to the point of forgiveness. The story underscores how God wants us to treat others. He gives us unlimited 'second chances'. This is the way He treats our weaknesses.

We must forgive in order to be forgiven. Nothing that others can do to us can in any way compare with what we have done to God. If God has forgiven us the debts we owe to him, we must forgive our neighbours the debts they owe to us. Nothing that we have to forgive can even faintly or remotely compare with what we have been forgiven. Yes, in Jesus, we have been forgiven a debt which is beyond all paying - for human sin brought about the death of God's own Son - and if that is so, we must forgive others as God has forgiven us.

Vocation Challenge:
"Lord, how often should I forgive…?"
How deeply do I comprehend Jesus' prayer: 'forgive us our sins as we forgive those who sin against us'?

Dear God, Forgiveness is a path that is oftentimes hard to walk on. In front of hurts and mistreatment, I claim for my rights and demand justice from others. Yet, You, Lord, call me to look at my sins and the many ways You have forgiven me. Let me revisit the areas of mercy You have afforded me so that I may in turn, give mercy to others. Amen.