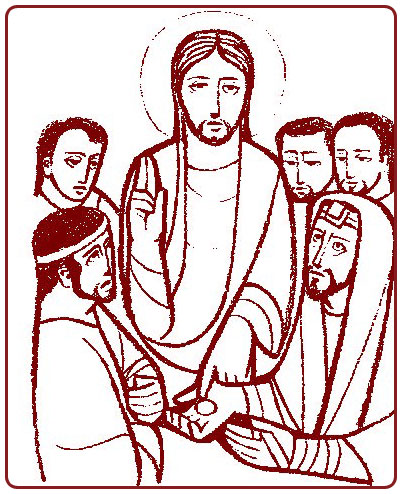 Then the Pharisees went and plotted to entrap him in what he said. So they sent their disciples to him, along with the Herodians, saying, ‘Teacher, we know that you are sincere, and teach the way of God in accordance with truth, and show deference to no one; for you do not regard people with partiality. Tell us, then, what you think. Is it lawful to pay taxes to the emperor, or not?’ But Jesus, aware of their malice, said, ‘Why are you putting me to the test, you hypocrites? Show me the coin used for the tax.’ And they brought him a denarius. Then he said to them, ‘Whose head is this, and whose title?’ They answered, ‘The emperor’s.’ Then he said to them, ‘Give therefore to the emperor the things that are the emperor’s, and to God the things that are God’s.’ When they heard this, they were amazed; and they left him and went away.

The enemies of Christ – then and now – want to force Christians into conflict with their surroundings in order to cast faith and morality from the public square.

They are hoping for one of two results: to make everyone worship the king and the king alone or to force true believers into exile.

Yet Jesus shows us that there is no real conflict.

Instead, the Lord shows that just as He makes demands of us, the king also has a right to make legitimate demands of us. And we have the duty to respond with the love and charity characteristic of someone who wishes to do everything well. This glorifies both God and King.

Then, whether we are working nights as a truck driver or spending our days in contemplative prayer, we will be fulfilling our vocation.

Dear Lord,
Often, I encounter those who wish to separate me from You and from my work in Your creation. Give me the wisdom to know how to give my best to both You and the king, maintaining a unity of life that is a witness to the Gospel.