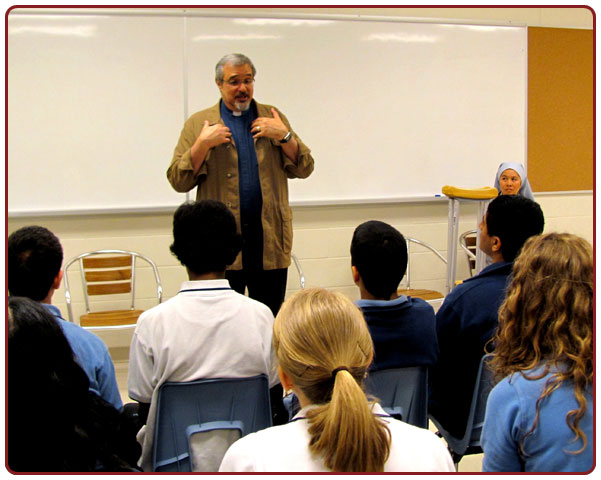 This is the testimony given by John when the Jews sent priests and Levites from Jerusalem to ask him, “Who are you?”

He confessed and did not deny it, but confessed, “I am not the Messiah.” And they asked him, “What then? Are you Elijah?” He said, “I am not.” “Are you the Prophet?” He answered, “No.”

Then they said to him, “Who are you? Let us have an answer for those who sent us. What do you say about yourself?” He said, “I am the voice of one crying out in the wilderness, ‘Make straight the way of the Lord,’” as the Prophet Isaiah said.

Now they had been sent from the Pharisees. They asked him, “Why then are you baptizing if you are neither the Messiah, nor Elijah, nor the Prophet?” John answered them, “I baptize with water. Among you stands one whom you do not know, the one who is coming after me; I am not worthy to untie the thong of his sandal.”

This took place in Bethany across the Jordan where John was baptizing.

John the Evangelist has coined a word, witness in his Gospel. It is the new word that appears 8 times in the Gospel he wrote that was the result of his faith and love in Jesus and of the faith of the first Christian community he instructed. For him, John the Baptist was only the ’witness’ to the Light, who is Jesus Christ.

There seems to be a movement during his time that gave the Baptist the prominent place above Christ. The Evangelist was careful to present him to the Christian community. He placed the Baptist as the forerunner, the ‘Voice’ heralding Jesus’ presence among His people. John the Baptist himself gave no encouragement to that but rather did everything to discourage any group or followers of his to make him above the Light.

The Evangelist, John, took steps to guard against it. The rightful place of Christ in the plan of God was the Evangelist’s key point in presenting the Baptist to us. Even today, people may swap allegiance by worshipping a preacher rather than Christ. It can also happen that people fix their attention upon the messenger rather than the Leader whose coming is announced.

John the Baptist’s response to the priests and Levites when they asked his identity and purpose, underscored the greatest virtue of his ministry: humility! He was only the ‘Voice’ and sees to it that no one should push Christ on to the sidelines of God’s plan.

With humility as the path, the Baptist offers this to us as our rightful way to acknowledge our place in Christ and we can now sincerely proclaim: “Maranatha! Rejoice!”

Dear God,
The light of glory, comfort and success can often be blinding in my ministry. They can rob me of the peace borne of humble service. When their sparks fly and hit me, let the words of John the Baptist clear my mind and heart. I want to make straight Christ’s path in my life. Allow me to re-focus my vocation motivations. Jesus Christ is the Light I follow. I come and serve, always rejoicing to bear witness to His light in me and in the world. Amen.