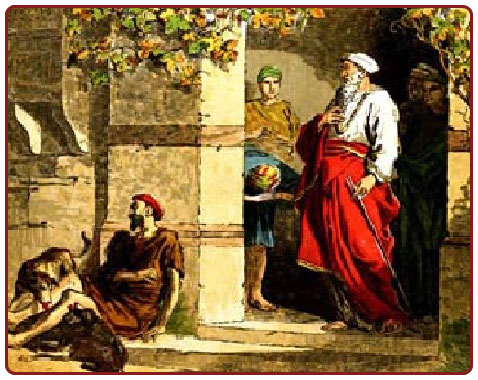 Jesus told this parable to those among the Pharisees who loved money. "There was a rich man who was dressed in purple and fine linen and who feasted sumptuously every day. And at his gate lay a poor man named Lazarus, covered with sores, who longed to satisfy his hunger with what fell from the rich man's table; even the dogs would come and lick his sores."

"The poor man died and was carried away by the angels to be with Abraham. The rich man also died and was buried. In Hades, where he was being tormented, he looked up and saw Abraham far away with Lazarus by his side. He called out, 'Father Abraham, have mercy on me, and send Lazarus to dip the tip of his finger in water and cool my tongue; for I am in agony in these flames.'"

"But Abraham said, "Child, remember that during your lifetime you received your good things and Lazarus in like manner evil things; but now he is comforted here, and you are in agony. Besides all this, between you and us, a great chasm has been fixed, so that those who might want to pass from here to you cannot do so, and no one can cross from there to us.'"

"The man who had been rich said, 'Then, father, I beg you to send Lazarus to my father's house-for I have five brothers, that he may warn them so that they will not also come into this place of torment.'"

In this parable, Jesus painted a landscape where his hearers could picture a contrast of two lifestyles - that of the rich man and that of the poor man called Lazarus. It is a landscape common in Palestine where poverty is hugely present and opulence is the lot of the rich. To his hearers, Jesus raised the bar of their social justice awareness.

The rich man is described as dressed in hugely expensive robes of purple and fine linen similar to those worn by high priests. He feasted in luxury everyday! There was no rest in his feasting of costly dishes. There was no observance of the Sabbath where work is prohibited for him and for his servants. He is a figure of indolent self-indulgence.

The poor man's name is Lazarus, which in Latin means God is my help. He is the only person given a name in Jesus' parables. He is the beggar by the gate of the rich man; He is hungry, weak and helpless, he cannot even ward off street dogs that lick his sores.

In the next life, Lazarus is in glory and the rich man is in torment. What is the sin of the rich man? He was not cruel to Lazarus. He did not hurt him with blows nor with words. His sin was that he never noticed Lazarus as part of his landscape. He only wallowed in his comfort zones of food and wealth. He felt no obligation to extend his gaze to the world of grief and pain. Then, his request to warn his brothers on earth was denied. To Jesus, God's word and truth are enough to change people's outlook in life.

Jesus invites us all to check the landscape of our lives and those around us. Are we doing something for others or doing nothing at all?

Vocation Meditation:
"Father, have mercy on me."
How can I describe the landscape of my Christian charity?

Dear God,
I welcome Jesus' parable exhorting me to look deeply into how much impact I must have in people's lives. There are times, Lord, I prefer to protect my comfort zones so as not to be disturbed by others' grief and pain. Help me to see my vocation as my daily response to heed the cry of the pained and the poor around me. Amen.