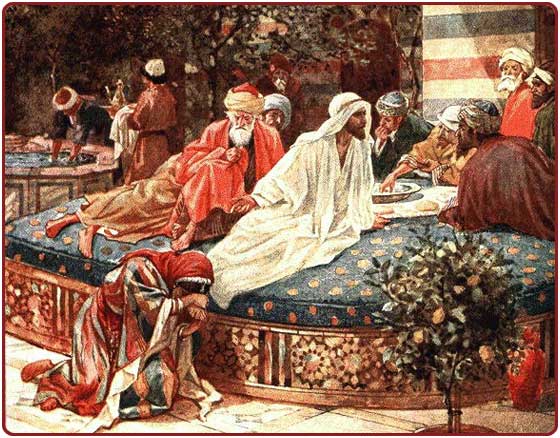 One of the Pharisees asked Jesus to eat with him, and he went into the Pharisee's house and took his place at the table.

A woman in the city, who was a sinner, having learned that Jesus was eating in the Pharisee's house, brought an alabaster jar of ointment. She stood behind Jesus at his feet, weeping, and began to bathe his feet with her tears and to dry them with her hair. The she continued kissing his feet and anointing them with the ointment.

Now when the Pharisee who had invited Jesus saw it, he said to himself, "If this man were a Prophet, he would have known who and what kind of woman this is who is touching him-that she is a sinner."

Jesus spoke up and said to him, "Simon, I have something to say to you." "Teacher, he replied, "speak."

"A certain creditor had two debtors; one owed five hundred denarii, and the other fifty. When they could not pay, he canceled the debts for both of them. Now which of them will love him more?" Simon answered, "I suppose the one for whom he cancelled the greater debt." And Jesus said to him, "You have judged rightly."

Then turning toward the woman, he said to Simon, "Do you see this woman? I entered your house; you gave me no water for my feet, but she has bathed my feet with her tears and dried them with her hair."

"You gave me no kiss, but from the time I came in she has not stopped kissing my feet. You did not anoint my head with oil, but she has anointed my feet with ointment."

"Therefore, I tell you, her sins, which were many, have been forgiven; hence she has shown great love. But the one to whom little is forgiven, loves little." Then Jesus said to her, "Your sins are forgiven."

But those who were at the table with him began to say among themselves, "Who is this who even forgives sins?" And Jesus said to the woman, "Your faith has saved you; go in peace."

Soon afterwards Jesus went on through cities and villages proclaiming and bringing the good news of the kingdom of God. The twelve were with him, as well as some women who had been cured of evil spirits and infirmities: Mary, called Magdalene, from whom seven demons had gone out, and Joanna, the wife of Herod's steward Chuza, and Susanna, and many others, who provided for them out of their resources.

Luke highlighted the kinds of love of those who gather around Him, especially of women touched by his kindness, compassion and desire to minister to His needs.

In Simon's affluent house which could have an open courtyard in the form of a hollow square, Jesus, the Teacher was invited for a meal and usually people would come in such a house-all kinds of people to listen to the pearls of wisdom uttered by one considered by them as a Rabbi. That explains the presence of a woman. Her actions were in contrast with the actions and attitudes of Simon.

The first woman had a sinner's love; humble, transparent, generous. She was conscious of nothing else but a burning need to express her love to receive forgiveness. Simon instead, was conscious of no need. He failed to offer the usual hospitality to guests. He had no compassion for sinners. The greatest of sin is to be conscious of no sin. The woman's great sense of need opened the door to the forgiveness of God.

The other women followed and attended Jesus' and his disciples' needs out of their resources. Their grateful and generous love followed Jesus everywhere. They were a mixed company of different backgrounds. Mary Magdalene had a dark and terrible past. Joanna, wife of Chuza was one Lady of the Court. Others must be ordinary women whose love became service to Jesus.

Jesus' love transforms hearts and minds. It is the miracle of His compassionate love that enables women and men of diverse backgrounds, temperaments and qualities to live and work together for the Kingdom.

Vocation Challenge:
"Do you see this woman?"
How do I see each person in my ministry? With Simon's eye or with Jesus' eye of compassion?

Dear God,
Each day I meet diverse kinds of people: caring, supportive, happy and there are those with challenging lifestyles and characters. Each one of us is tailored to fit in your Kingdom. Equip my vocation with Your compassion and generosity. Amen.