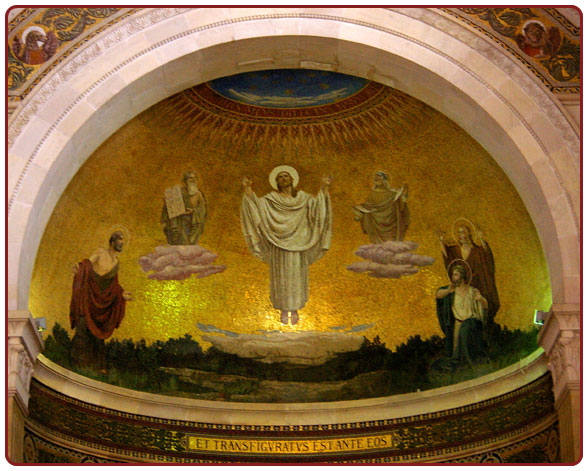 Jesus took with him Peter and John and James, and went up on the mountain to pray. And while he was praying, the appearance of his face changed, and his clothes became dazzling white.

Suddenly they saw two men, Moses and Elijah talking to Jesus. They appeared in glory and were speaking of his exodus, which he was about to accomplish at Jerusalem.

Now Peter and his companions were weighed down wiht sleep; but they had stayed awake; they saw this glory and the two men who stood with him.

Just as they were leaving him, Peter said to Jesus, "Master, it is good for us to be here; let us make three dwellings, one for you, one for Moses, and one for Elijah," but Peter did not know what he said.

While he was saying this, a cloud came and overshadowed them; and they were terrified as they entered the cloud. Then from the cloud came a voice that said, "This is my son, my Chosen; listen to him!"

When the voice had spoken, Jesus was found alone.

And the disciples kept silent and in those days told no one any of the things they had seen.

Jesus' future in Jerusalem loomed before Him and his disciples. Jesus had to make a decisive step before meeting His cross and His death. His disciples needed to know Him more. They needed to be introduced to an experience with Him that would strengthen their faith before Jesus' seeming defeat in front of His enemies. Jesus also needed the approval of God. The Father gave his confirmation to Jesus' willing surrender to His will. This would be Jesus' source of power, strength and love during His passion and death on the Cross. Jesus came to this mountain seeking and receiving God's approval. And He did.

In this Mount of the Transfiguration, the disciples were introduced to His glory in a glimpse. During this moment, God confirmed Jesus' identity and His relationship to the Father. To listen to Him is to listen to God. Jesus is the Chosen One, the Saviour!

The three apostles saw and heard of the glory of Jesus revealed on this Mount only when they were fully awake!

Vocation Meditation:
When they were fully awake, they saw His glory!
What will I shake off in me that I may be constantly 'awake' to see Jesus in my life?

Dear God,
Jesus' Mount of Glory was a climb of seeking Your will. It was also an invitation of friendship and trust that would forge the faith of His chosen friends to Himself and His mission. My vocation needs that kind of climb each day. Keep me awake to hear Your voice, to catch a glimpse of your glory so that I may courageously walk with Jesus to face my own 'Jerusalem'. Amen.