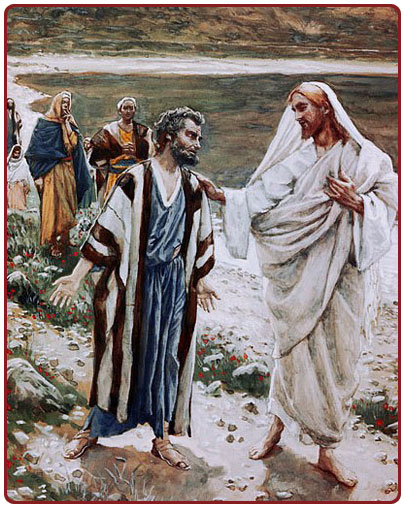 Just after daybreak, Jesus stood on the beach; but the disciples did not know that it was Jesus. Jesus said to them, "Children, you have no fish, have you?" They answered him, "No." He said to them, "Cast the net to the right side of the boat, and you will find some." So they cast it, and now they were not able to haul it in because there were so many fish.

That disciple whom Jesus loved said to Peter, "It is the Lord!" When Simon Peter heard that it was the Lord, he put on some clothes, for he was naked, and jumped into the sea. But the other disciples came in the boat, dragging the net full of fish, for they were not far from the land, only about ninety meters off.

When they had gone ashore, they saw a charcoal fire there, with fish on it, and bread. Jesus said to them, "Bring some of the fish that you have just caught." So Simon Peter went aboard and hauled the net ashore, full of large fish, a hundred fifty-three of them; and though there were so many, the net was not torn. Jesus said to them, "Come and have breakfast." Now none of the disciples dared to ask him, "Who are you?" because they knew it was the Lord. Jesus came and took the bread and gave it to them, and did the same with the fish. This was now the third time that Jesus appeared to the disciples after he was raised from the dead.

John found it important to add this second ending of his gospel to reveal to the first Christian communities and to all, the truth about the Resurrection of Jesus and the future of His Church

Jesus' resurrection was not a vision, not an appearance of a spirit or a ghost and neither a result of the author's creative imagination. He had died and has risen with power and now had come back to reassure His apostles that this is real. He is present among them; knows their needs; is close at hand and continues to teach and empower them.

Jesus led the Apostles to experience another catch of fish: 153 of them! For John, this number was not recorded for nothing. St. Jerome, the 4th century biblical scholar, explained that in the sea there are 153 kinds of fishes. The catch includes every kind of fish. The great number of fish was gathered into the net. The net held them all, strong and unbroken. John is clear in saying that the Church Jesus has entrusted to His apostles is universal. There should be no exclusiveness, selectiveness nor prejudice in the welcoming love of God that binds us to His Church.

Jesus entrusted His Church to the leadership of Peter. Before His apostles, Jesus gave Peter the chance to redeem his three-fold denial of Him: "Yes, Lord you know that I love you." Three times Peter was asked, three times he declared his love for Jesus, and three times Jesus entrusted to him His lambs and His sheep. Peter's humble and unconditional confession of love led Jesus to affirm before the other apostles, Peter as Shepherd of the Church, the one who should love Jesus' flock more than anyone else!

Vocation Challenge:
"Peter, do you love me?" "Feed my lambs."
How readily do I respond, "Yes, Lord you know that I love you," when I am called to 'feed' others along my vocation path?

Dear God,
The post-resurrection appearances of Jesus to His apostles were real and empowering. Jesus gathered them again, strengthened their faith and affirmed the continuity of His shepherding love to the Church. Give me the readiness and totality of Peter's love for Jesus and for the Church. Let these be the two great pillars of my vocation. Amen.