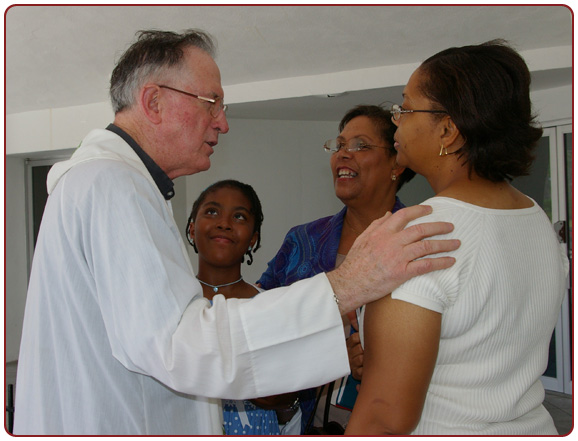 Returning from the region of Tyre, Jesus went by way of Sidon towards the Sea of Galilee, in the region of the Decapolis. They brought to him a man who was deaf and who had an impediment in his speech; and they begged him to lay his hand on him. Jesus took him aside in private, away from the crowd, and put His fingers into his ears, and He spat and touched his tongue. Then looking up to heaven, He sighed and said to him "Ephphatha," that is, "Be opened."

And immediately the man's ears were opened, his tongue was released, and he spoke plainly. Jesus ordered them to tell no one; but the more he ordered them, the more zealously they proclaimed it. They were astounded beyond measure, saying, "He has done everything well. He even makes the deaf to hear and the mute to speak."

Jesus made a very long journey going south to the Sea of Galilee, passing north by way of Sidon. It seems odd of Him and His disciples to travel that long way. One could think that this journey took no less than eight months during that time. It may well be that this long journey was a peaceful time of travel with His disciples. It was a long communion moment with them. In the next chapter, Peter would declare that Jesus is the Christ (Mark 8:27-29). It was in this lonely time together that this impression became a reality in Peter's heart. It was in this lonely time that the disciples would forge deeper their knowledge and relationship with Jesus. Jesus needed this long time with His disciples before the great tension of His approaching end.

Arriving in the district of the Decapolis, they brought to Jesus a man, a deaf-mute! It was the man's inability to hear that made his speech so imperfect. The disciples witnessed this miracle which so beautifully showed Jesus' way of treating people.

He took the man aside from the crowd, all by himself, a gesture of the most tender considerateness for the feelings of one who had experienced countless embarrassments and helplessness.

Throughout the whole miracle, Jesus used gestures that the deaf-mute could see and understand without words: Jesus put His hands in his ears. Then He touched his tongue with spittle, considered in those times to have a curative effect.

Jesus looked up to heaven to show him and everyone that it was from God that help was to come. Then Jesus spoke the word and the man was healed!

Such was the effect of awe and wonder of those present that they declared, "He had done all things well." These words echoed the same verdict of God upon His own creation in the book of Genesis.

Jesus came to the world restoring the order of creation, bringing healing to broken bodies and salvation to humanity. Jesus had begun the work of creation all over again. In the beginning of time everything had been good. Along the way, sin marred this goodness. Now, Jesus was bringing back the beauty and dignity of creation, restoring them as God wonderfully willed them for all time.

Vocation Challenge:
"Ephphatha." "Be opened."
What areas in my vocational journey need to be touched by God, made capable for greater loving?

Dear God,
You do all things well. Your goodness, beauty and love are etched in my being. When weakness, doubt and fear tighten their grip and paralyze my vocation journey, say the word. Restore peace and joy in my soul. Let me walk with You the long mile to a deeper knowledge of Your ways. Amen.