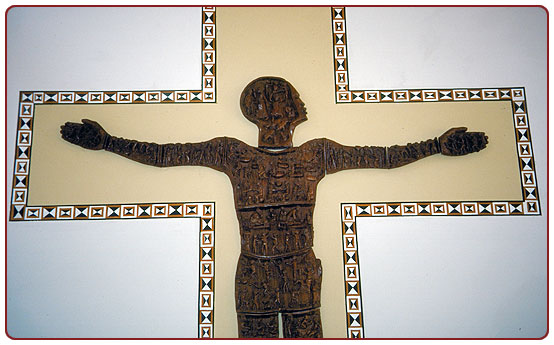 Among those who went up to worship at the festival were some Greeks. They came to Philip, who was from Bethsaida in Galilee and said to him, "Sir, we wish to see Jesus."

Philip went and told Andrew; then Andrew and Philip went and told Jesus. Jesus answered them, "The hour has come for the Son of man to be glorified. Very truly, I tell you, unless a grain of wheat falls into the earth and dies, it remains just a single grain; but if it dies, it bears much fruit. The person who hates their life in this world will keep it for eternal life."

"Now my soul is troubled. And what should I say-'Father, save me from this hour'? No, it is for this reason that I have come to this hour. Father, glorify Your name."

Then a voice came from heaven, "I have glorified it, and I will glorify it again."

The crowd standing there heard it and said that it was thunder. Others said, "An Angel has spoken to him." Jesus answered, "This voice has come for your sake, not for mine. Now is the judgment of this world; now the ruler of this world will be driven out. And I, when I am lifted up from the earth, will draw all people to myself." Jesus said this to indicate the kind of death he was to die.

The Greeks were known to be travelers, traders and people of inquiring minds. While in Jerusalem, the news of Jesus cleansing the temple of money changers must have reached them. The mention of them here by John was a faint hint of a gospel that will go out to all the world.

Philip, whose name sounded Greek, was first approached by them. Then, both Philip and Andrew brought them to Jesus. They sought to see Him. By this time, those who came to the festival knew things around Jesus had been building up to a crisis. Had Jesus come to solve this crisis with the glory of His conquest?

What they heard from Jesus were the last things anyone would expect. Jesus spoke to them in paradox. These were Jesus' version of what real glory meant for Him and for His Father. By dying comes life. By spending life for others do we retain it. By service comes greatness. By obedience like that of Jesus', the Father is glorified.

The tension in Jesus' words revealed His battle with his human longing to avoid the cross. Obedience to the Father did not come easily and without cost. Even while feeling afraid, Jesus accepted the Father's will before His hearers. Between this tension of the cross and the harvest of triumph ahead of Him, came the Voice of the Father that sealed Jesus' "Yes" to His will. Unmistakeably, the Father's immense love for Him and the ultimate victory of His sacrifice for the world became Jesus' sole source of strength and consolation in the dark days ahead.

Vocation Challenge:
My vocational journey cannot but embrace the paradox of the cross.
Do I allow my fears to paralyze me along this journey?

Dear God,
You call me daily to welcome the tension of the cross in following You. When my fear gets the better of me, sustain me. I want to seek You constantly. I allow my vocation to be shaped by the wisdom of Your Cross. Amen.