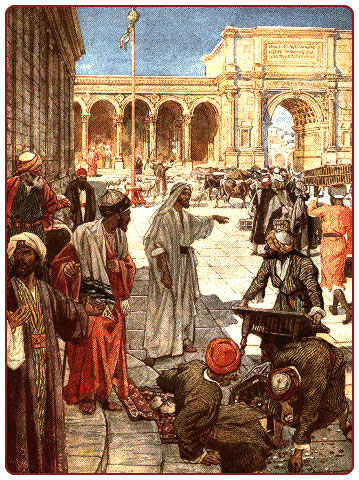 The Passover of the Jews was near, and Jesus went up to Jerusalem. In the temple he found people selling cattle, sheep, and doves, and the money changers seated at their tables. Making a whip of cords, he drove all of them out of the temple, both the sheep and the cattle. He also poured out the coins of the money changers and overturned their tables. He told those who were selling the doves, "Take these things out of here. Stop making my Father's house a marketplace!"

His disciples remembered that it was written, "Zeal for your house will consume me."

The Jews then said to Him, "What sign can you show us for doing these?" Jesus answered them, "Destroy this temple, and in three days I will raise it up." They then said, "This temple has been under construction for forty-six years, and will you raise it up in three days?" But Jesus was speaking of the temple of his body.

After he was raised from the dead, his disciples remembered that he had said this; and they believed the Scripture and the word that Jesus had spoken.

The Passover was the greatest of all the Jewish feasts. Pilgrims came from all over the land and each had to make their offerings and pay the Temple tax as required by Law. Animals for offerings and money changers were all over. Pilgrims needed to pay their dues to the Temple and extortions of the poor pilgrims by the money changers were not uncommon. The cleansing of the Temple was deemed necessary by Jesus for 3 reasons.

He acted as he did because God's house was desecrated. In the Temple, there was worship without reverence.

Jesus acted as he did while observing the conduct happening in the Temple Court. Jesus was angry and was moved to the depths of his heart knowing that the well-intentioned pilgrims were being shut out by the marketplace atmosphere from the presence of God they were seeking. Jesus, with the whip, delivered his message forcefully and hence, restored the true purpose of the house of God. This action raised questions about His zeal for the house of God.

Only after the resurrection were Jesus' words and actions in this incident understood by His apostles. It was their own experience of the Risen Christ that brought them to the understanding of the real worship of God.

Our worship of God, our entry into His presence and our approach to Him are not dependent on anything that human hands can build or human minds devise. In the street, in the home, on the open road or in church, we have our inner temple, the presence of the Risen Christ forever with us throughout all the world.

Vocation Challenge:
God calls me to worship Him with reverence and love.
What kinds of 'marketplace noise' crowd out my privileged moments with God?

Dear God,
Zeal for Your house consumes the lives of those You call. Give me a loving and reverent heart to worship You unceasingly in all that I do and desire. My vocation truly finds joy and meaning in your Holy Presence. Amen.