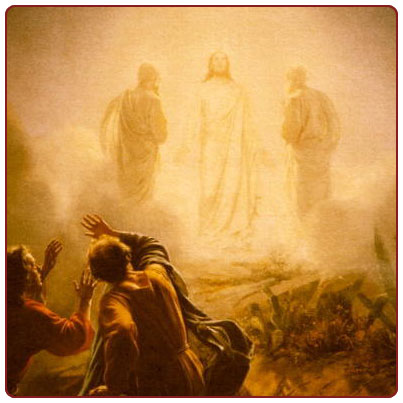 Jesus took with him Peter and James and John, and led them up a high mountain apart, by themselves. And he was transfigured before them, and his clothes became dazzling white, such as no one on earth could bleach them.

And there appeared to them Elijah and Moses, who were talking with Jesus. Then Peter said to Jesus, "Rabbi, it is good for us to be here; let us make three tents, one for you, one for Moses, and one for Elijah." Peter did not know what to say, for they were terrified.

Then a cloud overshadowed them, and from the cloud there came a voice, "This is my Son, the Beloved; listen to him!" Suddenly, when they looked around, they saw no one with them any more, but only Jesus. As they were coming down the mountain, Jesus ordered them to tell no one about what they had seen, until after the Son of Man had risen from the dead. So they kept the matter to themselves, questioning what this rising from the dead could mean.

Jesus had just finished telling his disciples that it was necessary for the Son of Man to be rejected by the elders, be killed and rise in three days.(Mk. 8:31) But His disciples did not get it. They still cannot comprehend Jesus' messianic plan. Jesus needed solitude with his Father and sought the heights of the mountain bringing Peter, James and John. During His intense communion with the Father, Jesus was transfigured. The 3 apostles became the privileged witnesses of Jesus' transfiguration. This meant a lot for Jesus and for His apostles.

In the Transfiguration, Jesus' divinity was revealed. His glory shone, His identity affirmed and the Father confirmed that Jesus, indeed, is the Messiah. The divine command: "Listen to Him." would mean that all must look to Jesus and accept the ways He fulfills God's will including the painful reality of His dying on the cross.

Moses and Elijah met with Jesus. Moses as the supreme law-giver of Israel and Elijah as the first and the greatest of the Prophets, came to behold Jesus, the Messiah. For them, Jesus is the consummation of all they spoke about and all that the people of Israel hoped for. The apostles saw in Jesus, all that history had longed for and looked forward to. All that the Scriptures revealed, had been leading up to Him and to His sacrifice on the Cross.

The cloud that overshadowed them recalled the awesome presence of God as it did on Mt. Sinai. The apostles beheld God. They thought that basking in His presence and remaining in the heights were good enough. However, as privileged witnesses of the moment, Peter, James and John, went down the mountain with Jesus and were advised to keep this memory in their hearts until the Resurrection would fully reveal Jesus' messianic mission. Without the Cross, Jesus' glory and His rising from the dead would not be fully understood.

Vocation Challenge
God transforms his followers during intense moments of prayer and contemplation.
Do I seek solitude and silence to align my will with God's will?

Dear God,
You overshadow the lives of those who follow You. Your presence in my life transforms me. Make me humble and attentive to your voice. In Jesus, let me live my vocation, working only for your glory. Amen.