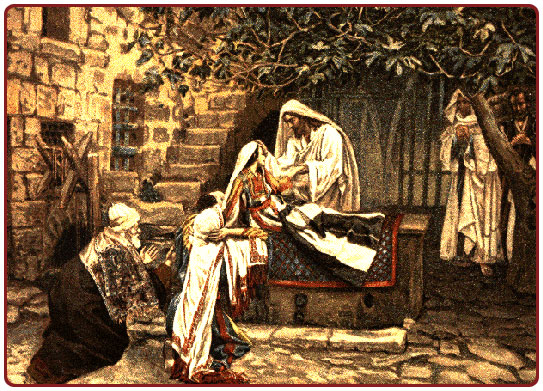 When Jesus had crossed in the boat to the other side, a great crowd gathered around him; and he was by the sea. Then one of the synagogue leaders named Jairus came and, when he saw Jesus, fell at his feet and begged him repeatedly. "My little daughter is at the point of death. Come and lay your hands on her, so that she may be made well, and live." So Jesus went with him. And a large crowd followed him.

Some people came from the leader's house to say, "Your daughter is dead. Why trouble the teacher any further?" But overhearing what they said, Jesus said to the leader of the synagogue, "Do not fear, only believe."

Jesus allowed no one to follow him. When they came to the house of the leader of the synagogue, he saw a commotion, people weeping and wailing loudly. When he had entered, he said to them, "Why do you make a commotion and weep? The child is not dead but sleeping." And they laughed at him.

There is the contrast between the despair of the mourners and the hope of Jesus. 'Don't bother the Teacher,' they said. 'There's nothing anyone can do now.' And Jesus, 'Do not fear. Just believe!' From the mourners side, it is the voice of despair that speaks. On Jesus' side, the voice of hope!

There is the contrast between the unrestrained distress of the mourners and the calm serenity of Jesus. There was weeping and loud wailing that signaled death had come to the little girl. Their distress was unrestrained and overwhelming. Amidst the commotion Jesus was calm, quiet, serene and in control.

The difference was due to Jesus' perfect confidence and trust in God and in the power He has within. Any worse human disaster can be met with courage and gallantry when we meet it with God. The mourners laughed at Jesus to scorn, but their laughter was turned to an amazed wonder at what Jesus can do. Jairus' humility to ask for help and the faith he placed in Jesus turned their sorrow into joy!

Dear God,
You bring new life to weary hearts. When sorrow comes to test my vocation, I need not fear but believe. Call me to get up. Each time I respond, your grace restores me for greater loving. Amen.