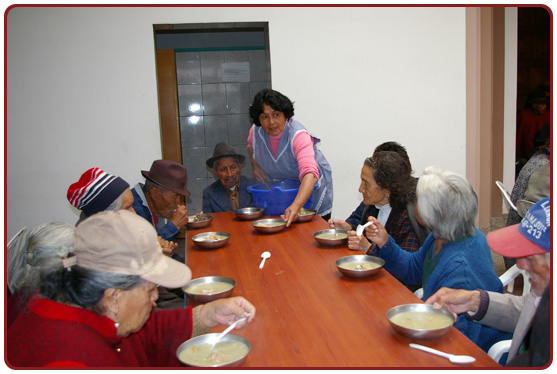 Jesus went to the other side of the Sea of Galilee, also called the Sea of Tiberias. A large crowd kept following him, because they saw the signs that he was doing for the sick. Jesus went up the mountain and sat down there with his disciples. Now the Passover festival was near.

When he looked up and saw a large crowd coming toward him, Jesus said to Philip, "Where are we to buy bread for these people to eat?" He said this to test him, for he himself knew what he was going to do. Philip answered him, "Six months' wages would not buy enough bread for each of them to get a little."

One of his disciples, Andrew, Simon Peter's brother, said to Jesus, "There is a boy here who has five barley loaves and two fish. But what are they among so many people?" Jesus said, "Make the people sit down." Now there was a great deal of grass in the place; so they sat down, about five thousand in all.

Then Jesus took the loaves, and when he had given thanks, he distributed them to those who were seated; so also the fish as much as they wanted.

When they were satisfied, he told his disciples, "Gather up the fragments left over, so that nothing may be lost." So they gathered them up, and from the fragments of the five barley loaves, left by those who had eaten, they filled twelve baskets.

When the people saw the sign that he had done, they began to say, "This is indeed the Prophet who is to come into the world". When Jesus realized that they were about to come and take him by force to make him king, he withdrew again to the mountain by himself.

Jesus is the Bread of Life. Episodes from His life like this passage, prepared His disciples to experience and reflect on Jesus' power and goodness in providing God's people not only with material food but also the Bread that is Himself. The crowd who came sought Him for signs of healing and for more contact with Him. That day, they came in droves, hunger written on their faces. Seeing this, Jesus took action. Two others did the same. Then came the miracle of the loaves and fishes!

From the circle of Jesus, there was Andrew. In contrast to Philip who looked at the situation as hopeless, Andrew was the man who meant to say: "I'll see what I can do. I'll trust Jesus to do the rest." Andrew sought ways and means to obey the Master. By bringing the boy and his little provision to Jesus, the miracle saved the day! We never know what possibilities lie before us when we bring someone to Jesus.

From the crowd, there was the boy. Andrew sought him. The boy presented himself, his loaves and two fish. Not much. In what little he had, Jesus could fix something for His people. Jesus was grateful. Had his provision been withheld, the feeding of the crowd would not have taken place.

Jesus needs what we can bring Him. It may not be much but He needs it. He asks His Church to tend the needs of His flock. The Church invites us to open our hearts to come and be part of His miracle of giving life to the world.

The world today could be denied miracle after miracle and triumph after triumph because we fail to bring to Jesus what we have and what we are. If we would lay ourselves generously at the altar of His service, how much Jesus could do with us and through us. By sharing, we become like Him, Bread given for others!

Vocation Challenge:
"Give Me your 'loaves and two fish'".
Do I see my daily gift of giving as a participation in the Church's call to "feed God's people"?

Dear God,
We seek You continually. You entrusted the Church to seek us out and become Bread for others, too. I want to live my vocation to the full. I offer You all that I am. Daily, let me experience the joy of the miracle of giving-always with readiness and generosity.