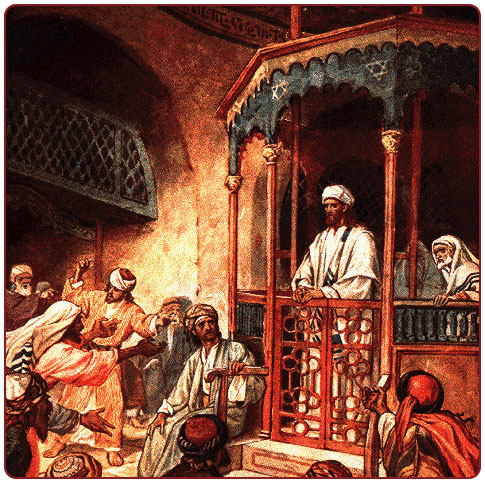 Jesus came to his hometown, and his disciples followed him. On the Sabbath he began to teach in the synagogue, and many who heard him were astounded. They said, "Where did this man get all this? What is this wisdom that has been given to him? What deeds of power are being done by his hands! Is not this the carpenter, the son of Mary and brother of James and Joses and Judas and Simon, and are not his sisters here with us?" And they took offence at him.

Then Jesus said to them, "A prophet is not without honour, except in his hometown, and among his own kin, and in his own house."

And Jesus could do no deed of power there, except that he laid his hands on a few sick people and cured them. Jesus was amazed at their unbelief. Then he went about among the villages teaching.

Jesus' visit to Nazareth found himself before the most severe critics, those who knew Him from childhood. He came not as a fellow villager of theirs but as a Rabbi because he brought with him a little circle of followers, His disciples. Then He taught in their synagogue! His teaching was greeted not with wonder but with contempt. They took offence at Him! Familiarity had bred a mistaken contempt. It blocked their eyes from seeing and their hearts from welcoming His good news. Why?

They only saw in Jesus, the carpenter. For them, He was only a working man! Despising Jesus' background and trade, they framed Him and all He did 'in the box'. We must be wary of evaluating others by externals and incidentals. Jesus took upon Himself the ordinariness of life with all its common tasks to reveal His closeness to humanity.

They despised Jesus because they knew His family. For them, there was nothing great in the household of Mary! Jesus' worth was measured by His human family and His upbringing. The result of these was that Jesus could do no mighty works in Nazareth save healing a few. The atmosphere around him in Nazareth was hostile.

There are some things .that cannot be done in the ministry unless the atmosphere is ripe with faith, openness and surrender to the newness of God's ways. A great responsibility is ours. We can either help or hinder the works of Jesus. We can open the door wide to Him - or shut Him out of our lives.

Vocation Challenge:
"They took offence at Him."
How do I face critical coldness or hostility in my ministry?

Dear God,
Your call to follow You thrives best in hearts and places that are welcoming and trusting. Come and make Your home in me. Should indifference and hostile attitudes appear in my vocation path, clothe me with wisdom and courage. Then bring me back to You. Amen.