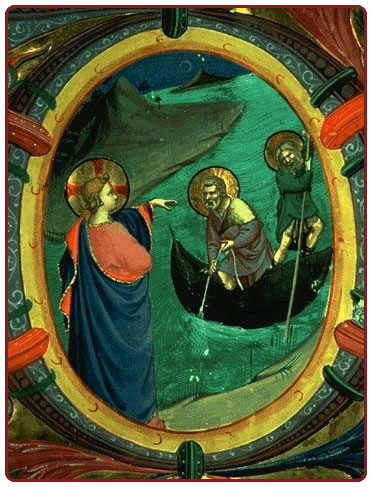 After John was arrested, Jesus came to Galilee, proclaiming the good news of God, and saying, "The time is fulfilled, and the kingdom of God has come near; repent, and believe in the good news."

As Jesus passed along the Sea of Galilee, he saw Simon and his brother Andrew casting a net into the sea - for they were fishermen. And Jesus said to them, "Come, follow me and I will make you fishers of people." And immediately they left their nets and followed him.

As Jesus went little further, he saw James son of Zebedee and his brother John, who were in their boat mending the nets. Immediately, he called them; and they left their father Zebedee in the boat with the hired men, and followed him.

It is of the greatest interest to study the men whom Jesus picked out as his first followers. He called them as they were. They were simple folk, neither learned nor wealthy. They were fishermen, very ordinary people of the village. No one ever believed in ordinary men and women as Jesus did. Because they believed and followed the call that was bigger than their world, they changed the world.

He called them with a personal note: Follow ME! It was a personal call of Jesus to Himself. This call of each of them began with that tug on their open heart that can beget an unshakeable loyalty. They did not escape His divine gaze. Following Christ is falling in love with who He is, not because of anything that He said but because of everything that Jesus is!

Jesus called and offered them a task. He called them not to a life of ease, not to a life of lethargic inactivity but to service. In service they can invest their lives. In this task for the Kingdom they would have to spend themselves and sacrifice themselves, and in the end, die for His sake and for the sake of others. Jesus offered them to a task wherein they could win something for themselves only by giving their all to Him and to others dear to His Kingdom.

Vocation Challenge:
Jesus calls followers willing to invest their lives in Him.
Am I ready to give up my comfort zones to serve Him in others?

Dear God,
You call me to Yourself. You give me a vision of Your Kingdom with a task bigger than myself. Let me see your Presence as I faithfully carry out my daily work. Let me recognize Your voice that summons: "Follow Me"! Amen!