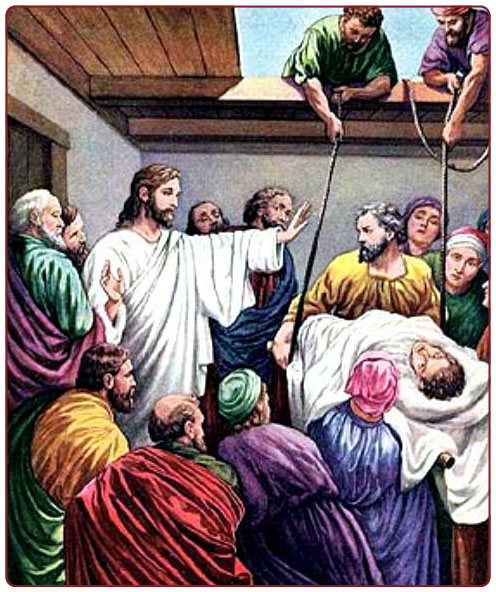 When Jesus returned to Capernaum, it was reported that He was at home. So many gathered around that there was no longer room for them, not even in front of the door; and He was speaking the word to them. Then some people came, bringing to Jesus a paralyzed man, carried by four of them. And when they could not bring him to Jesus because of the crowd, they removed the roof above him; and having dug through it, they let down the mat on which the paralyzed man lay.

When Jesus saw their faith, he said to the man, "Child, your sins are forgiven." Now some of the scribes were sitting there, questioning in their hearts, "Why does this fellow speak in this way? It is blasphemy! Who can forgive sins but God alone."

At once Jesus perceived in his heart that they were discussing these questions among themselves; and He said to them, "Why do you raise such questions in your hearts? Which is easier to say to the paralyzed man, 'Your sins are forgiven,' or to say, 'Stand up and take your mat and walk'? But so that you may know that the Son of Man has authority on earth to forgive sins' - he said to the man who was paralyzed - 'I say to you, stand up, take up your mat and go to your home."

Jesus had completed His tour of the synagogues so he returned home to Capernaum. In no time, a crowd had filled the house where he stayed and filled it to capacity, from the street to the door, to the interior of the house all eagerly listened to His word.

From the crowd, four men bearing a paralysed friend of theirs, not able to enter by the door, found ways to bring their friend to Jesus. These were men of resource! They dug out a hole from the roof made of beams filled with mud and brushwoods and lowered their friend down directly at Jesus' feet, so Jesus could heal him. For their friend in need, no barriers could stand their faith. But Jesus surprised everyone of an odd way to a total cure. He healed the man from the inside and out!

First, He forgave his sins! Here, Jesus released the man from his inner paralysis that kept him from being fully alive. Forgiving his sins, Jesus revealed more than what eye can see. In Him, God's power is at work. In Him, God's mercy is revealed. In Him, everyone, when freed from the bondage of sin, can be truly alive! Finally, Jesus completed the cure of the paralyzed. The man can now stand up and walk!

Vocation Challenge:
God calls me to help others to stand up and walk.
Am I a person of resource who, against all odds, find ways to bring friends to Jesus?

Dear God,
You bring healing to everyone. Before I could be a friend to many, let me realize what sins hinder me from becoming fully alive in You. Heal me and forgive me. Only then, can my vocation be a pleasing service to You. Amen.