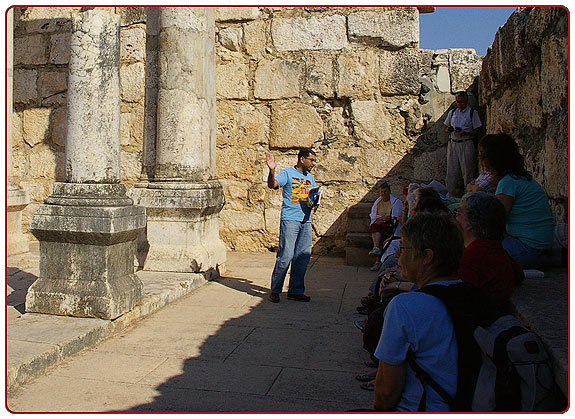 The disciples came to Capernaum; and when the Sabbath came, Jesus entered the synagogue and taught. They were astounded at his teaching for he taught them as one having authority, and not as the Scribes. Then there was in their synagogue a man with an unclean spirit, and he cried out, "What have you to do with us, Jesus of Nazareth? Have you come to destroy us? I know who you are, the Holy One of God."

But Jesus rebuked him, saying, "Be silent, and come out of him!" And the unclean spirit, convulsing the man and crying with a loud voice, came out of him. They were all amazed and they kept on asking one another, "What is this? A new teaching-with authority! He commands even the unclean spirits, and they obey Him."

At once Jesus' fame began to spread throughout the surrounding region of Galilee.

Jesus recognized in the emergence of St. John the Baptist, God's call for Him to action. He was baptized by him and received God's seal of approval. He knew He was equipped by the Spirit for His task ahead. He was also tested by the devil and defeated his devious tactics with ways only God's Son could do. Then Jesus chose his disciples, a little circle of humble, kindred spirits that He might write His message upon them. And now, He must make a deliberate launching of His campaign of healing God's people, of bringing God's reign in their hearts. Jesus had an urgent message from God to give. But where to start? He chose the most natural place where God's people met together. Therein He began His campaign-in the synagogue, the teaching place, the place of formation for the Jews. Since it was an open place where a competent teacher can deliver his message, Jesus took his place and taught them, while speaking with His personal authority. For His hearers, His whole method and the atmosphere of His teaching was like a new revelation that no other experts of the law delivered, in their born days.

In that same synagogue, the unclean spirit in the man-possessed tested His authority. Challenged by the demon, Jesus took immediate action to reveal the power of God in Him. He did not come to destroy. He came to heal and save His people. To rebuke the evil spirit, no elaborate incantations, spells and magical rites used by other exorcists were needed. With one word of clear, simple, powerful command, Jesus exorcised the demon and released the man from the demon's rule. Jesus spoke with authority and acted with the authority of God. In their synagogue they found THE Teacher. And they believed in Him. Now, that Jesus campaign was launched, his fame began to spread, gathering believers, followers and seekers of God's reign.

Vocation Challenge:
Jesus teaches His followers and inspires them to immediate action.
Is there a courageous readiness in me to translate God's word into concrete service in the Church?

Dear God,
You call your disciples to work for Your Kingdom. Let me 'dwell in your house' first, that I may be taught by You and learn Your ways. Inspire me to immediate action. Let my response to Your Word always be: "Yes". Amen.