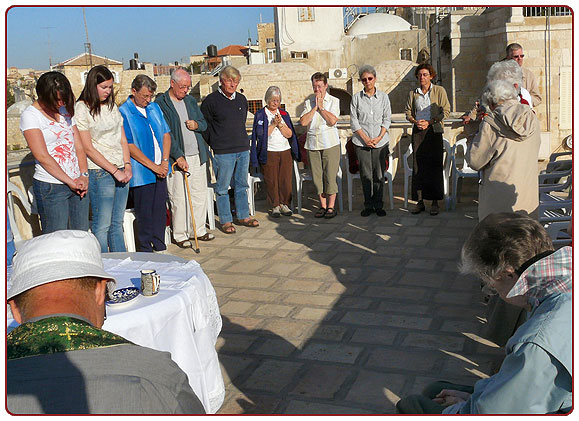 While they were talking about this, Jesus himself stood among them and said to them, "Peace be with you." They were startled and terrified, and thought that they were seeing a ghost. He said to them, "Why are you frightened, and why do doubts arise in your hearts? Look at My hands and My feet; see that it is I myself. Touch me and see; for a ghost does not have flesh and bones as you see that I have."

And when He had said this, He showed them His hands and His feet. While in their joy they were disbelieving and still wondering, He said to them. "Have you anything here to eat?" They gave him a piece of broiled fish, and He took it and ate in their presence. Then He said to them, "These are my words that I spoke to you while I was still with you-that everything written about Me in the law of Moses, the Prophets, and the Psalms must be fulfilled." Then He opened their minds to understand the Scriptures, and He said to them, "Thus it is written, that the Christ is to suffer and to rise from the dead on the third day, and that repentance and forgiveness of sins is to be proclaimed in His name to all nations, beginning from Jerusalem. You are witnesses of these things."

Jesus had to come to His own gathered in the upper room, to calm their fears and assure them of their faith. In this passage certain great notes of the Christian faith are struck, key points to Jesus' Resurrection finale.

It stresses the reality of the resurrection. As the Risen Lord, Jesus is no phantom or product of their hallucination. He was real. He was the same Jesus who died and now is risen. Christianity is not founded on the dreams of disordered minds or the visions of fevered eyes. It is founded on the One who, in actual historical fact, faced, fought and conquered death with victory.

It stresses the necessity of the cross. It was to the cross that all Scriptures looked forward. The cross was not forced on God. It was part of God's plan, for it is the one place on earth where, in a moment of time, we see God's eternal and merciful love for humanity revealed in its depth and greatness.

It stresses repentance and forgiveness of sins are central in the proclamation. Only when men and women find their way back to God would Jesus' sacrifice on the cross reach its true meaning and fulfillment.

At the end Jesus launched his disciples to the world as His witnesses, keeping them true to His message and true to their vocation.

Vocation Challenge:
I was chosen by Jesus to be a witness of His love and mercy to the world.
Do I fix my gaze on Him, on His words and His Church to make my vocation effective and steadfast?

Dear God,
After the resurrection, Jesus came to His own to seal their faith amidst fear and darkness of doubt. May I not shrink at the shadows of the cross along my path. I want to start each day to fix my gaze on His Risen glory. Let my vocation flourish as I witness the triumph of Your merciful love amidst difficulties.
Amen.