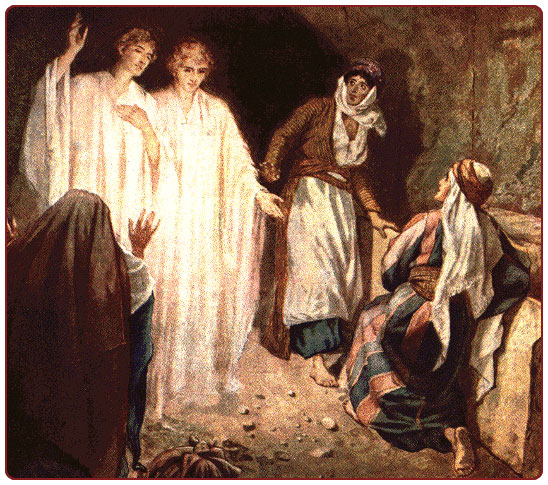 Early on the first day of the week, while it was still dark, Mary Magdalene came to the tomb and saw that the stone had been removed from the tomb. So she ran and went to Simon Peter and the other disciple, the one whom Jesus loved, and said to them, "They have taken the Lord out of the tomb, and we do not know where they have laid him."

Then Simon Peter came, following him, and went into the tomb. He saw the linen wrappings lying there, and the cloth that had been on Jesus' head, not lying with the linen wrappings but rolled up in a place by itself. Then the other disciple, who reached the tomb first, also went in, and he saw and believed; for as yet he did not understand the Scripture, that he must rise from the dead.

Mary Magdalene had sinned much and having been forgiven, gave back this love to Jesus through her devotion to all that He was and to those close to Him.

Pained yet full of caring, she came to visit the tomb of Jesus very early on the third day. Unprepared to find the open tomb was a situation that Mary felt she could not face herself and so she returned to the city to seek out Peter and John. Humbled by his denial of Jesus, Peter continued to take his role as leader and servant among the stricken apostles. It was to him and to John, the one who stood faithful by the cross, that Mary went to share the news of the empty tomb.

Peter and John went for a run. Obviously, the younger John, reached the tomb first. Seeing the stone rolled away, John looked in, and went no further. Peter, not only looked in but went inside. For the moment, Peter was only amazed and was lost in looking at the empty tomb and the linen wrappings. But things began to happen in John's mind. In this gospel of his, John recorded his own experience of the resurrection.

This was his faith story.

John, the contemplative disciple, followed Peter inside, looked at what Peter saw and was wrapped in his thoughts. If someone had removed Jesus' body, if tomb-robbers had been at work, why should they leave the grave clothes? Then something struck him-the grave clothes! They were not dishevelled and disarranged! They were lying there, still in their folds. The grave-clothes did not look as if they had been put off or taken off. They were simply lying there. Jesus had simply got out of them! Buried in deep thoughts, the sight suddenly struck his faith. John knew what had happened to Jesus. It was not that he read it in Scripture. The empty tomb was not only a sight! It was a personal experience of the mystery of Jesus' death and His rising. In the empty tomb, John understood who Jesus said He IS! There, John believed! INDEED, JESUS IS RISEN!

Vocation Challenge:
Like John and Peter, my vocation is to grow in faith. What is my faith story?
Do I see the call to prayer like 'the run to the empty tomb" to experience the mystery of Jesus' death and rising in my life and that of others?

Dear God,
All those you call, treasure a personal faith encounter with You. May I share this experience with joy and zeal in my ministry. Increase always my faith in Jesus, the Risen Lord. May I see beyond the 'linen wrappings' of life to Your glorious Presence that can fill all the emptiness within and around me. Amen.