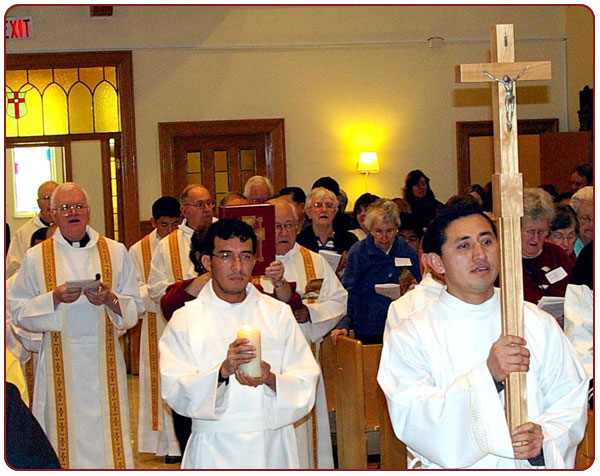 Jesus said to Nicodemus: "No one has ascended into heaven except the one who descended from heaven, the Son of Man. And just as Moses lifted up the serpent in the wilderness, so must the Son of May be lifted up, that whoever believes in Him my have eternal life.

"For God so loved the world that he gave His only Son, so that everyone who believes in him may not perish but may have eternal life.

"Indeed, God did not send the Son into the world to condemn the world, but in order that the world might be saved through him."

Today, we celebrate the feast of the Triumph of the Cross. In Jesus' time, the cross was a symbol of torture, defeat and shame. The Romans used the cross to decorate their city walls, corpses hanging on them, a punishment to lawbreakers. What might be called a sign of defeat to the world, for us believers, the cross has become a symbol of triumph, a sign of our redemption.

Jesus' death on the Cross was His surrender to God the Father's saving will. This had elevated Jesus' supreme sacrifice to a redemptive act, granting the world the amazing grace of salvation. Salvation in Jesus Christ meant a total conquest over evil. It overturned eternal damnation caused by sin that had claimed slavery of man's freedom since the First Fall. On that Cross, by virtue of His Incarnation, Jesus suffered for us. He surrendered His humanity to the Father for us. As our Saviour, He gave God the love and glory due to Him for us. In return, God restored our dignity as daughters and sons of God and restored the dignity of creation for all time. With Jesus' Passion, Death and Resurrection, then, all of humanity became the new creation! We are now a people stamped with the promise of new life in God, gifted each day with renewed freedom to love Him and others!

Vocation Challenge:
I wear the cross to follow Jesus' courageous 'YES' to the Father's will.
Do I give time in prayer to make Jesus' 'YES' on the Cross strengthen my resolve to follow my vocation against all odds?