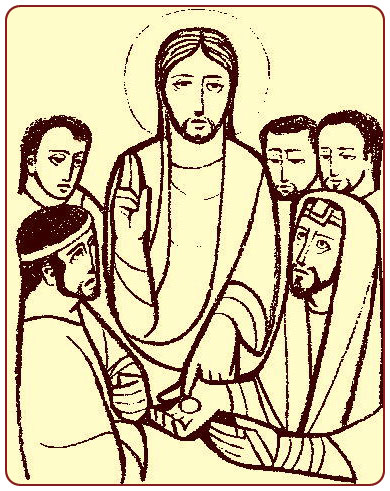 When the chief priest and Pharisees heard the parables, they realized that Jesus was speaking about them. Then the Pharisees went and plotted to entrap Jesus in what he said. So they sent their disciples to him, along with the Herodians, saying, "Teacher, we know that you are sincere, and teach the way of God in accordance with truth, and show deference to no one; for you do not regard people with partiality. Tell us, then, what you think. Is it lawful to pay taxes to the emperor, or not?"

But Jesus, aware of their malice, said, "Why are you putting me to the test, you hypocrites? Show me the coin used for the tax." And they brought Him a denarius. They He said to them, "Whose head is this and whose title." They answered, "The emperor's." Then He said to them, "Give therefore to the emperor the things that are the emperor's, and to God the things that are God's."

The Jewish leaders, after hearing Jesus' three parables that placed them as the unsatisfactory son of the Father, as the wicked tenants and as the condemned guests of the king's feast, they now launched their counter attack on Jesus. For the Jews, paying taxes to the Romans was resentful. For them God was their only king. Paying tax to an emperor would validate his kingship and so insult their God. On the other hand, for Jesus to disregard paying taxes would anger the Herodians who were loyal to the emperor. Jesus was open for trouble, so the Pharisees and Herodians thought. Jesus' response to them is unique wisdom, a teaching that is timeless, a challenge that empowers both sides to strike the balance between duties to God and to one's country. Every Christian has dual citizenships. Christians are citizens of their country and also citizens of heaven. Both citizenships must work together with the end to always promote a humanity that respects all human rights and man's right to be faithful to his God. When this truth was challenged one time in history, St. Thomas More hammered it with martyrdom: "I am the King's good servant but God's first."

Vocation Challenge:
I am the King's good servant but God's first.
My vocation is to love: how can I strike the balance of giving to God what is God's and to my country what is my country's?