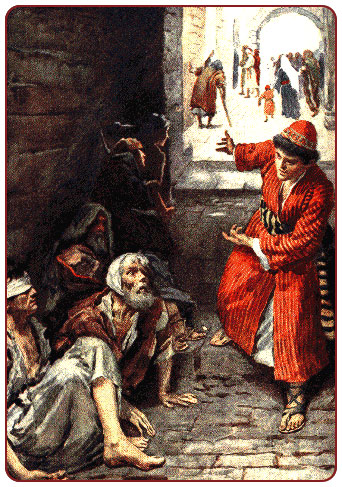 Once more Jesus spoke to the chief priests and Pharisees in parables: "The kingdom of heaven may be compared to a king who gave a wedding banquet for his son. He sent his slaves to call those who had been invited to the wedding banquet, but they would not come.

"Again he sent other slaves, saying, "Tell those who have been invited: Look, I have prepared my dinner, my oxen and my fat calves have been slaughtered, and everything is ready. come to the wedding banquet," But they made light of it and went away, one to his farm, another to his business, while the rest seized his slaves, mistreated them, and killed them.. The king was enraged. He sent his troops, destroyed those murderers, and burned their city.

"Then he said to his slaves, "The wedding is ready, but those invited were not worthy. Go therefore into the main streets, and invite everyone you find to the wedding banquet." Those slaves went out into the streets and gathered all whom they found, both good and bad; so the wedding hall was filled with guests."

The invitation of God for all is to a feast as joyous as a wedding feast. It is to joy that Christians are invited and for those who refused, they miss the joy of the Kingdom. The things that make people deaf to the invitation of Christ are not necessarily bad in themselves. One may prefer his estate, business or his daily concerns. They did not go off on a wild spree or immoral adventure. They went off on the task of efficiently administering their business life. It is very easy to be so busy with the things of the present that the things of eternity are forgotten; to be so preoccupied with the things which are seen that the things which are unseen are forgotten. We can be overwhelmed by the claims of the world that the soft invitation of the voice of Christ cannot be heard. The tragedy of life is that it is so often the 'second bests' which shut out the 'bests' in life. It is the things that are good in themselves which shut out the things that are supreme. We can be so busy making a living that we fail to make a life, rich in God. Finding Him, we find the purpose of everything. God's invitation is also the invitation of grace. All those who were gathered did not deserve it. It came to them for nothing. God's invitation, God's call is wide-armed, open-hearted, generous hospitality of the king. It was grace which offered the invitation and grace which gathered them in. Our thanksgiving, then, is supreme!

Vocation Challenge:
Everything is a grace.
What other "bests" in my life do I have to place second to the gift of vocation God has graced me?