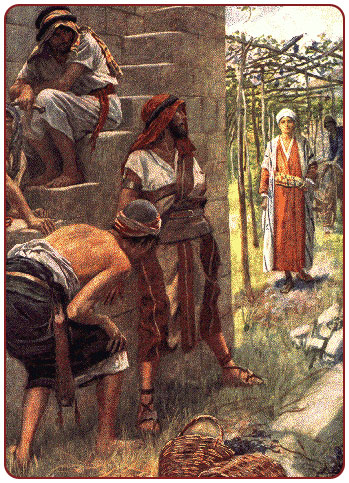 Jesus said to the chief priests and the elders of the people. "Listen to another parable. There was a landowner who planted a vineyard, put a fence around it, dug a winepress in it, and built a watchtower. Then he leased it to tenants and went to another country.

"When the harvest time had come, he sent his slaves to the tenants to collect his produce. But the tenants seized his slaves and beat one, killed another, and stoned another. Again he sent others slaves more than the first; and they treated them in the same way.

Finally, he sent his son to them, saying, 'They will respect my son.' But when the tenants saw the son, they said to themselves, 'This is the heir; come let us kill him and get his inheritance,' So they seized him, threw him out of the vineyard, and killed him.

"Now when the owner of the vineyard comes, what will he do to those tenants?" They said to him, "He will put those wretches to a miserable death, and lease the vineyard to other tenants who will give him the produce at the harvest time."

Jesus said to them, "Have you never read the scriptures: "The stone that the builders rejected has become the cornerstone; this was the Lord's doing, and it is amazing in our eyes'? Therefore I tell you, the Kingdom of God will be taken away from you and given to a people that produces the fruits of the kingdom."

The listeners of Jesus knew very well that their Jewish nation was the referred vineyard and its owner is God. Here, in this vivid story, Jesus set out a clear picture of the history of His people and the consequences of their deliberate rejection of Him. This parable, strong, decisive and clear in its terms has much to say also about God, of human nature and of Jesus. God showed trust. He entrusted the vineyard to the cultivators. God showed patience in sending not one but many to care for His vineyard. Untrue to their task, God's judgment came. He gave the vineyard to others. This also tells of human privilege and responsibility. The vineyard was equipped with everything. God gave His people a task and with it the resources whereby to do it. Their deliberate opposition to His ways was sinful in His eyes. Finally, it tells of the claim of Jesus. He was unlike others who were sent. He IS the Son. His sacrifice willingly accepted was declared openly to the Jewish leaders. He was the stone rejected by them, yes, but has now become the foundation stone of the Kingdom built to last and to share its fruits to those willing to heed God's call and commit to take on His ways.

Vocation Challenge:
This is the Lord's doing and it is amazing in our eyes!
What contradictions in my vocation turned out to be an amazing experience of God?