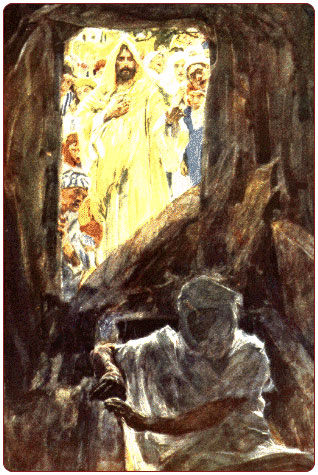 Then Jesus, again greatly disturbed, came to the tomb. It was a cave, and a stone was lying against it. Jesus said, "Take away the stone." Martha, the sister of the dead man, said to him, "Lord, already there is a stench because he has been dead four days." Jesus said to her, "Did I not tell you that if you believed, you would see the glory of God?" so they took away the stone. And Jesus looked upward and said, "Father, I thank you for having heard me. I knew that you always hear me, but I have said this for the sake of the crowd standing here, so that they may believe that you sent me." When he said this, he cried with a loud voice, "Lazarus, come out!"

Jesus had circle of beloved friends that opened their homes and hearts to His friendship and to His words. This time one of them, Lazarus, succumbed to death. Jesus even delayed in coming to be there with him. And when he finally came, he knew that was the time for the glory of God to be revealed. Before the tomb, Martha warned Jesus of the signs that all is gone for Lazarus - the stench, his body in decay! Jesus ordered Martha to focus not on the signs of death in the tomb but on the sign of Life that is in Him! He is the Resurrection! He can command life where there is darkness, death, separation, loss and hopelessness. He asked her to believe, to see the glory of God. Lazarus came out from his tomb of stone. Martha came out from her tomb of unbelief!!!!

Vocation Challenge:
Come out of yourself! See God's glory in Jesus!
Do I constantly keep my focus on Jesus even amidst contradictions?