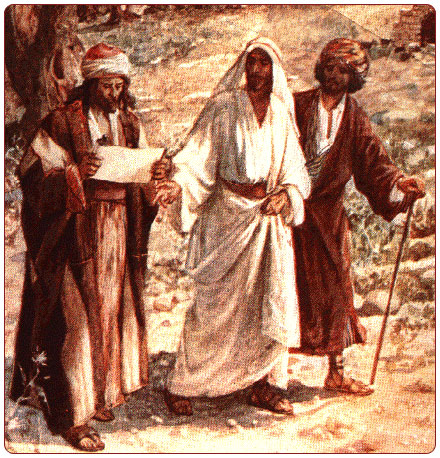 On the first day of the week, two of the disciples were going to a village called Emmaus, about eleven kilometers from Jerusalem, and talking with each other about all these things that had happened. While they were talking and discussing, Jesus himself came near and went with them, but their eyes were kept from recognizing him.

And Jesus said to them, "What are you discussing with each other while you walk along?" They stood still, looking sad. Then one of to them, whose name was Cleopas, answered him, "Are you the only stranger in Jerusalem who does not know the things that have taken place there in these days?"

In the midst of the big news that Jesus had risen from the dead, the 2 disciples were still lost in their own confusion and disbelief. The newness of the Resurrection just did not fit in their own limited understanding of Jesus and what He came for. Their eyes were shut from recognizing him and their hearts were sad. They were indeed, in a standstill of their faith. On the road, perceived as a stranger to them, Jesus, far from forcing them to believe fast in His Resurrection, walked beside them, befriending, and enlightening their earthly concerns with Scriptures that they knew so well. Then slowly, their attention did not focus anymore on their sadness. They took interest in the Stranger's presence that brought fire in their hearts and light to their minds. Later on, they would declare how their hearts warmed as Jesus "broke open" the Scriptures to them.

Vocation Challenge:
Jesus walks the road of life.
Walk, Listen, Capture His Word.
What area of your life needs Jesus' light to warm it with His abiding Word?