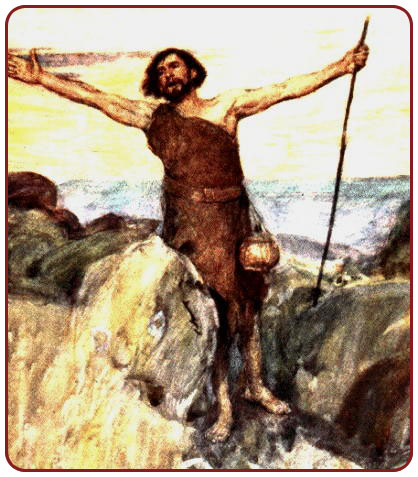 This is the testimony given by John when the Jews sent priests and Levites from Jerusalem to ask him, "Who are you?" He confessed and did not deny it, but confessed, "I am not the Messiah," And they asked him, "What then? Are you Elijah?" He said, "I am not." "Are you the Prophet?" He answered, "No."

Then they said to him, "Who are you? Let us have an answer for those who sent us. What do you say about yourself?" He said, "I am the voice of one crying out in the wilderness, 'Make straight the way of the Lord.' as the Prophet Isaiah said."

Now they had been sent from the Pharisees. They asked him, "Why then are you baptizing if you are neither the Messiah, nor Elijah, nor the Prophet?" John answered them, "I baptize with water. Among you stands one whom you do not know, the one who is coming after me; I am not worthy to untie the strap of his sandal." This took place in Bethany across the Jordan where John was baptizing.

The voice of John had reverberated far and wide across the hills and byways of Judea. He had eyebrows raised at him regarding his knowledge and relationship with the promised Messiah. What does he know of Him? Is he the One promised to come?

The emissaries of the Jews can only gather these responses from John, himself: He was not the Messiah, though he hinted that. If only they knew that the Messiah was there with them. He was not Elijah, believed by them as one to come someday to settle which things and people were clean and unclean.

He was not the expected Prophet, neither, whom God, in due time will raise from among His people. In the end, John denied that all these honors were his.

What he wanted to say to them was simply a humble awareness of his task: He is nobody but a voice telling all Jews and non-Jews to get ready for the coming of the King, for He is on His way. John's response was what every true preacher and teacher of good news ought to be: only a Voice, a pointer to the King! The last thing that he wanted anyone to do was to look at him. John wanted the people to forget him and see only the Messiah. The way he carried out his vocation is every disciple's path.

Vocation Challenge:
My vocation, like John's, is to be a voice, a pointer to the King.
Do I fix my gaze and my mind on Jesus so that I become a faithful echo of His gospel?