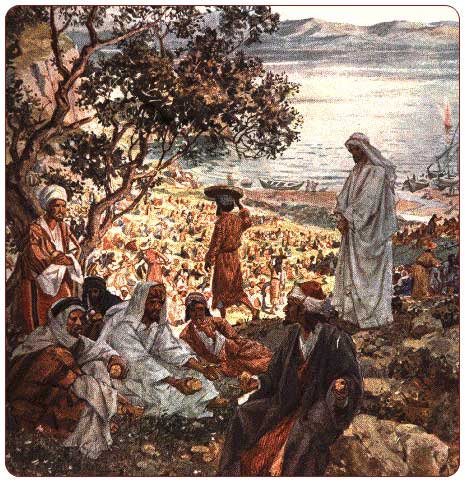 When Jesus heard that Herod beheaded John the Baptist, he withdrew in a boat in a deserted place by himself. But when the crowds heard it, they followed Him on foot from the towns. When He went ashore, Jesus saw a great crowd and he had compassion for them and cured their sick.

When it was evening, the disciples came to him and said, "This is a deserted place, and the hour is now late; send the crowds away so that they may go into the villages and buy food for themselves."

Jesus said to them, "They need not go away; you give them something to eat." They replied, "We have nothing here but five loaves and two fish." And he said, "Bring them here to me." Then Jesus ordered the crowds to sit down on the grass. Taking the five loaves and the two fish, he looked up to heaven, and blessed and broke the loaves, and gave them to the disciples, and the disciples gave them to the crowds. They all ate and were filled.

Jesus needed to be alone to grieve the death of his cousin, John the Baptist. But the crowds that followed Him allowed no space to grieve this great loss. They brought to Him their sick, their pain- burdens they had been carrying all along. For them, Jesus can lift their burdens. He can heal their pain. Seeing them, Jesus just knew it was not the time to think of His own pain. Curing their sickness, Jesus owned their pains. Their burdens are now light.

On the other hand, the apostles failed to see the space of compassion Jesus gave to the crowd. For them, sending the crowds home early was an easy solution to have more space for themselves. That, too, would release them from the responsibility of feeding the crowds. Jesus instead, urged His apostles to stretch further, their understanding and compassion. Following Jesus' advice, they witnessed how a little provision from the poor themselves, when brought to Jesus, became food enough for a multitude. That day, Jesus took entirely the burdens of the poor that sought Him. He provided their other needs before they asked Him. Jesus filled their day not only with compassion and healing but also with food enough for their journey home.

Vocation challenge:
Present to the Lord your needs. He is in control.
How much inner space can I stretch further to take on Jesus' compassionate heart?